Long time no see, eh? Well, all I can say is that class 11th got me like ‘what?!’  Completely unarmed. It hit me like a wrecking ball; yeah I closed my eyes and swung; left me crashing in a blazing fall; all it ever did was wre-e-eck me. Oh yes, it has left me quoting Miley Cyrus, which ain’t good. Explaining my plight again would be like trying to save a relationship that was never worth more than two potatoes and a pea. So here’s something we all love, awards! Yay! 😀

Okay, right. I was nominated for the award by Suyash and Saya. Be sure to check their blogs out first though. Both of them are amazing people. Drop by Suyash’s blog for some mind-blowing photography and travel stories, and have a peek into Saya’s blog for some awesome poetry and her lovely attitude. 😀

Below are few rules for accepting the Liebster Award

Well, since both of them had a different set of rules for the award (regarding the number), therefore I’ve decided to take the average and let the number be 8 instead of 11, and 5.

Eight Other Facts About Me

Dwayne: I wish I could just sleep until I was eighteen and skip all this crap-high school and everything-just skip it.

Frank: Do you know who Marcel Proust is?

Dwayne: He’s the guy you teach.

Frank: Yeah. French writer. Total loser. Never had a real job. Unrequited love affairs. Gay. Spent 20 years writing a book almost no one reads. But he’s also probably the greatest writer since Shakespeare. Anyway, he uh… he gets down to the end of his life, and he looks back and decides that all those years he suffered, Those were the best years of his life, ’cause they made him who he was. All those years he was happy? You know, total waste. Didn’t learn a thing. So, if you sleep until you’re 18… Ah, think of the suffering you’re gonna miss. I mean high school? High school-those are your prime suffering years. You don’t get better suffering than that.

1. Where was your most memorable trip / vacation?

2. Which is the book that you read, inspired you the most?

The Alchemist by Paulo Coelho.

3. What is your favourite pastime / activity when you are alone?

4. What would you like to do if you win a million dollar in a blogging / photography or any contest?

I guess what anyone else would do; start checking out boxes from that long forgotten bucket list. At least now you have a reason to follow your dreams, right?

5. What is your favourite food / dish?

Eh…I can’t pin point on one! I almost love everything food! 😀 But if it needs to be done, then it’s going to be the gatte ki sabzi made by my mother.

6. Which is your favourite city that you have travelled to or wish to travel in future?

Might be a bit clichéd but it’s got to be New York! ❤

7. Which is your favourite horror movie?

I’m not much into horror movies, but I’d still say The Shining.

8. Who is your favourite personality / character from the history of the world?

Maharaja Jai Singh. This guy had the swag.

9. Which invention / discovery do you think changed the face of the world?

I believe it’d be the camera. Imagine the world without a camera…ugh.

10. What / who would you like to be born as, in your next birth (reincarnation)?

A dog, for sure. For I would love to be the source of happiness in any person’s life, for once.

11. Which is the best photo shot by you so far?

Ideally, this oughta be answered by ‘the one I haven’t shot yet’. But whatever.

1. Name a moment till now which has brought on tears of sadness or gratitude or happiness etc.

Tears of sadness would be when the two of my best friends left Lucknow, and moved to different cities. This happened at the end of class 10th, and is by far the most soul-crushing thing to ever happen to me. Both of them were like family and now they’re just as distant as the sun.

2. Have you felt an incomplete feeling as to what you are doing is not enough? If yes, what did you do?

Um, I’m feeling it right now. I think I need to study more hard since 11th is not exactly how I had thought it would be.

3. Have you ever had a chance to rectify a wrong decision on your part?

I guess I’ll pass on this one. (Too Young To Answer)? maybe.

4. Have you ever done a crazy thing while in public? If yes, what and what was other people’s reaction?

Oh yes! Have I ever written about the time when I, my sister, and my mother stole a packet of spices because the shopkeeper was busy attending to other customers, and ignoring us from the corner of his eye? Nope?! Well then, this deserves a full post 😉

5. Have you ever been at cross roads in life where choosing any option over other was equally painful? If yes, what did you do?

Ah, well, yes. It would be my decision of studying in a university abroad than studying in India. Well, if I choose to study abroad then I would have to leave my home, family, and dog, and move into a completely strange place. Whereas if I stay in India, then I don’t think my frequencies would ever be able to match with that of the Indian Education System.

Hmm, so that’s that. Moving on.

The Questions To Be Answered

Q1) What is the one thing that you’ve learnt from blogging up till now?

Q2) Name a fandom which you’re a part of. Also state the reason why.

Q3) What is the one advice you’ll give to a sixteen year old?

Q4) Are you satisfied with the current world order? If not, what is the first thing you’ll change if given the power?

Q5) If given a chance, what is the one thing that you’ll go back in time for, to change in your life?

Q8) If given a chance, which fictional character would you like to go an a date with?

The Blog Of Karthi 🙂

Phew! Hopefully, this is long enough for an apology letter. And hopefully, I won’t take such long siestas from my blog. =)

29 thoughts on “The Liebster Award” 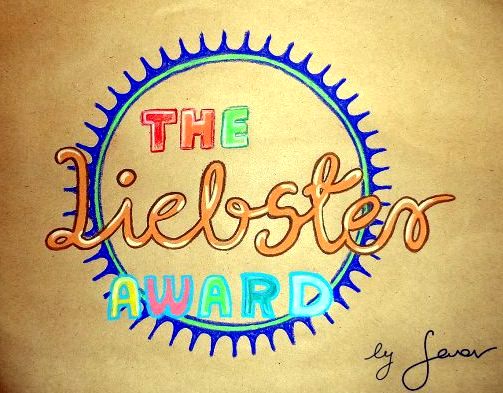